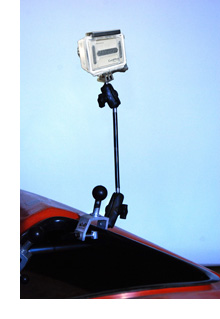 The Kayalu YakBastard is a marine-grade aluminum clamp capable of gripping a kayak lip, a canoe or dinghy bench or boat gunwale (a.k.a. "gunnel").

One YakBastard can host one or two cameras, GPS units, fishfinders, iPod/iPhones, navigation lights, spotlights, or any other accessories.

The YakBastard's name hints at the nature of this beast. While portable and versatile the YakBastard has a stubbornly strong grip.

What's more, the YakBastard is built tough for freshwater and saltwater use.

Unlike competitive marine clamps, the YakBastard's structural components are 100% constructed of premium marine-grade, anodized aluminum and stainless steel, not plastics or plated metals.

The YakBastard can host any of any gear or lights compatible with a RAM Mounts 1-inch "B" ball or a 1.5-inch "C" ball. This means you can pop your existing gear (e.g. Kayalu suction mount accessories, Radpole arms and accessories, Toughbar extensions, RAM Aqua Box® for iPhone/iPod — even the RAM Mounts cradle on your car windshield) on a YakBastard. 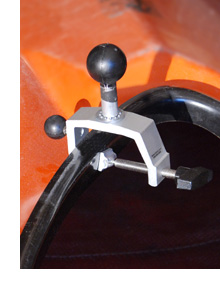 As shown at left, the YakBastard can be deployed in a variety of configurations — with one or two balls in either of two locations on the clamp, one at the head and a second on the spine.

What's really great about the YakBastard is that two different sized balls, one RAM "B" size and one "C" size ball, can be hosted on the same clamp.

The YakBastard clamp's jaws open to 2" wide (5 cm). The clamp has a large mouth, engineered for straddling a boat's gunwale lip to grip to the wall. 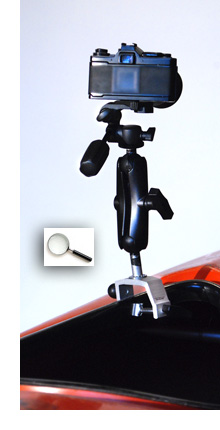 Each RAM ball has a threaded stud that is screwed into the clamp. The clamp can accept two balls,The RAM balls are included separately in the YakBastard package, allowing them to be attached, interchanged and removable from either of two holes on the clamp.

The YakBastard includes two strips of adhesive-backed foam rubber are as a measure of protection to prevent your deck surface from being marred by the clamp's jaws.

A YakBastard can be ordered at no extra charge with any custom ball configuration bonded directly to the clamp with industrial Loctite® threadlocker.

So, did we name it the YakBastard because of its yak-borne heritage? Not exactly...

Developing the YakBastard we married original components manufactured by two of our partners, the world-renown marine vendors RAM Mounting Systems and Tite-Lok/Blackhawk Inc. So, the YakBastard is a child of extraordinary parents.

Made and assembled in the USA.

View YakBastards in our Online Catalog